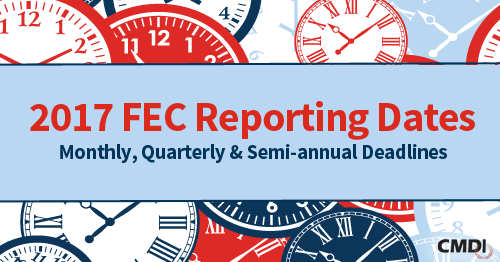 While 2017 is not an election year for most, PACs, parties and candidate committees are still required to submit regular filings to the Federal Election Commission.

Download one of these helpful one-pagers to remind you of the deadlines to submit reports throughout 2017:

Since this is a non-election year, the FEC permits PACs and party committees that are not engaged in election activities to change their filing reports from monthly to semi-annual. The semi-annual option only requires reports to be filed three times for 2017:

The FEC’s website recently posted instructions on how to change filing frequencies for the 2017 calendar year:

Switching Filing Frequency? Party committees that do not conduct reportable federal election activity and all PACs have the option to choose to file reports on a “monthly” or “quarterly” filing schedule. Some committees prefer to file reports on a monthly basis during a federal election year, and on a less-frequent basis during a nonfederal election year (such as 2017). PACs and party committees are permitted to switch filing frequencies one time per year. To switch your committee’s filing frequency in 2017, attach a letter (paper filers only) or a Form 99 to your 2016 year-end report (due 1/31) indicating that you will now be filing reports on the other schedule. If you are switching from monthly to quarterly, be aware that quarterly filers actually file only twice in non-election years (a mid-year report due 7/31/17 and a year-end report due 1/31/18) but must file additional reports if they make contributions or expenditures in connection with a special election.