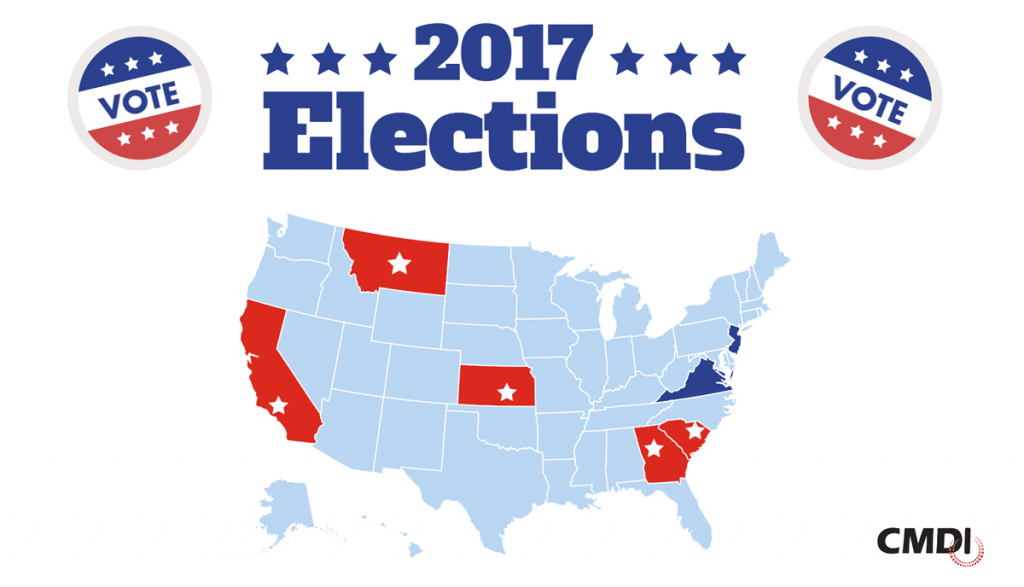 Today, voters in the metro Atlanta area will go to the polls to decide the replacement for Dr. Tom Price, the new secretary for Health and Human Services, in the sixth congressional district of Georgia.

If last week’s election in Kansas was nationalized as a test of voter satisfaction with President Trump, the special election in GA-6 has even higher stakes. With 18 candidates running in the jungle primary, a run-off is expected on June 20. While GA-6 leans Republicans with a Cook PVI score of R+8, Democrats have tried to turn this race into a referendum on President Trump by pouring millions in Jon Ossoff’s campaign. The race has raised more money from around the country than any previous race in the congressional district with at least $4.5 million opposing Ossoff.

Like the race in Kansas, President Trump has tweeted about Georgia. Senator Marco Rubio (R-FL) and Former House Speaker Newt Gingrich recorded robocalls for Judson Hill, one of the Republicans in the race. While he did not endorse any candidates, Ambassador John Bolton released a statement strongly questioning Ossoff's national security experience.

While Ossoff is ahead of Republicans in polls, he has never broken 50%, so a run-off is expected. According to an average taken by FiveThirtyEight, Ossoff leads in the polls with 46%. Republicans are split between Karen Handel at 18%, Bob Gray at 13%, Dan Moody, at 9%, and Judson Hill at 9%. Because aggregate Republican support polls at 51%, and early voting returns show that roughly equal numbers of Republicans and Democrats participating, The GOP is favored to win on June 20.

But Kansas and Georgia aren’t the only states with elections this year. Both New Jersey and Virginia will elect a new governor and hold elections for their state legislatures. California, Montana, and South Carolina will also hold special elections to fill empty House seats.

Scroll down to read more about the upcoming special elections or print off our latest infographic covering 2017 elections. 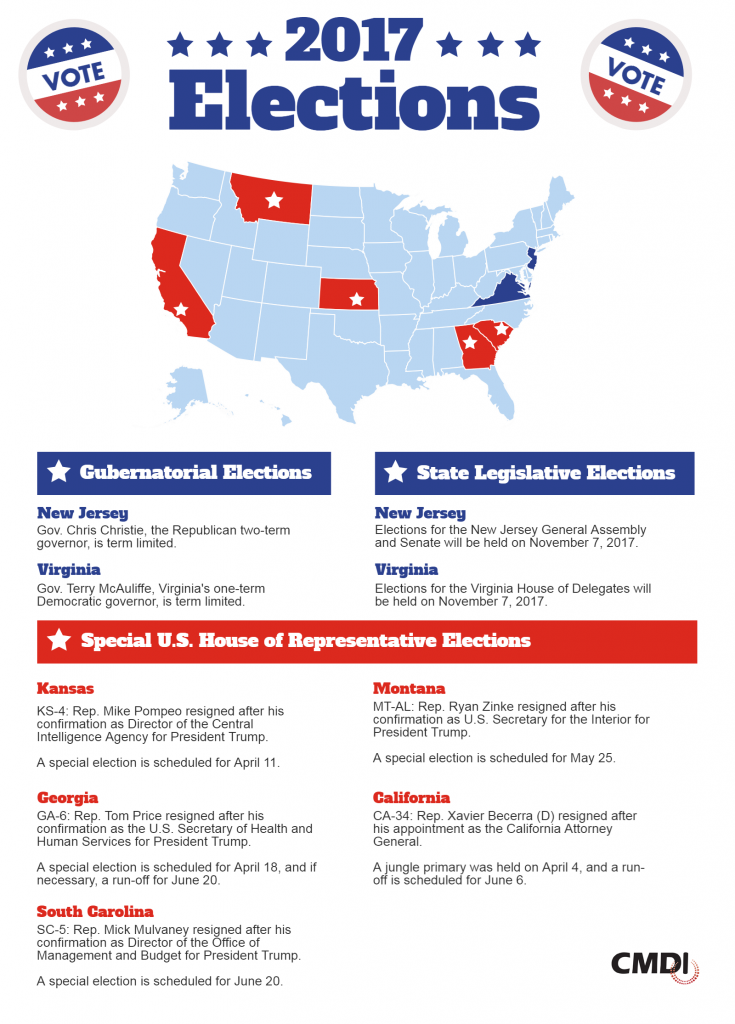 In SC-5, voters will replace Rep. Mick Mulvaney (R), who resigned to serve as the Director of the U.S. Office of Management and Budget under President Trump. A primary election is scheduled on May 2 with the general on June 20 with three Democrats, seven Republicans, and five third-party candidates running.

This race is considered safe for Republicans, which makes the May 2 primary a focus. A run-off is scheduled for May 16 if no one emerges with 50% of the vote.

After Georgia, Montana is the next competitive special House election. On May 25, voters will replace Ryan Zinke, who is now serving as Secretary of the Interior, to fill Montana's lone congressional seat.  A general election will be held on May 25 with a Republican, Democrat, and Libertarian candidate running.

Senator Benie Sanders endorsed Rob Quist, the Democrat in the race, and will campaign with him in May. On the Republican side, Donald Trump, Jr. endorsed Greg Gianforte and will visit Montana this week. The Congressional Leadership Fund has spent at least $1 million to oppose Democrat Rob Quist and launched TV ads in March. The NRCC also started a $273,000 TV and digital ad buy last week. However, state party officials warn about the dangers of using Montana as a bellwether for 2018 mid-terms:

“There are some people on the national level who are saying this is the referendum of what’ll happen with Trump, because our state went for Trump. But the reality is it’s local. Our state is unique: We elected Steve Bullock and Trump by a wide margin,” said Jim Larson, chairman of the state Democratic Party.

In CA-34, voters will go to the polls to replace Rep. Xavier Becerra (D), who resigned after he was appointed the Attorney General for California. A jungle primary was held on April 4, and two Democratic candidates, Jimmy Gomez and Robert Lee Ahn, will proceed to the run-off election on June 6. Only 10% of registered voters participated, which caused an upset for the progressive wing of the Democratic Party since three “Berniecrats” were on the ballot.

In November, the Garden State will vote for a new governor since Gov. Chris Christie (R) is term-limited after serving for the past eight years. A primary is scheduled for June 6. Four Republicans, eight Democrats, and one Green Party candidate have filed. Phil Murphy, an executive with Goldman Sachs, has an early lead in the Democratic primary, and Lt. Gov. Kim Guadagno is ahead of her Republican challengers.

Recent polls show that the race is wide open. A Quinnipac poll from early March has Murphy leading Guadagno 47-25%. However, 25% of voters are still undecided since it's early in the race.

This year, Gov. Terry McAulilffe is term-limited after serving one term. With a primary set for June 13, two Democrats and three Republican candidates have filed. Current polls show that Tom Perriello is tied with Lt. Gov. Ralph Northam in the Democratic primary. Ed Gillespie leads Republicans by 38 points compared to Prince William Board of County Supervisors Chairman Corey A. Stewart at 11 points, and Sen. Frank W. Wagner with 10%. These early polls have surprised pundits, who expected Republicans to have the contested race.

Virginia will also hold an election for the House of Delegates in November.