The Money Behind the GA-6 Special Election 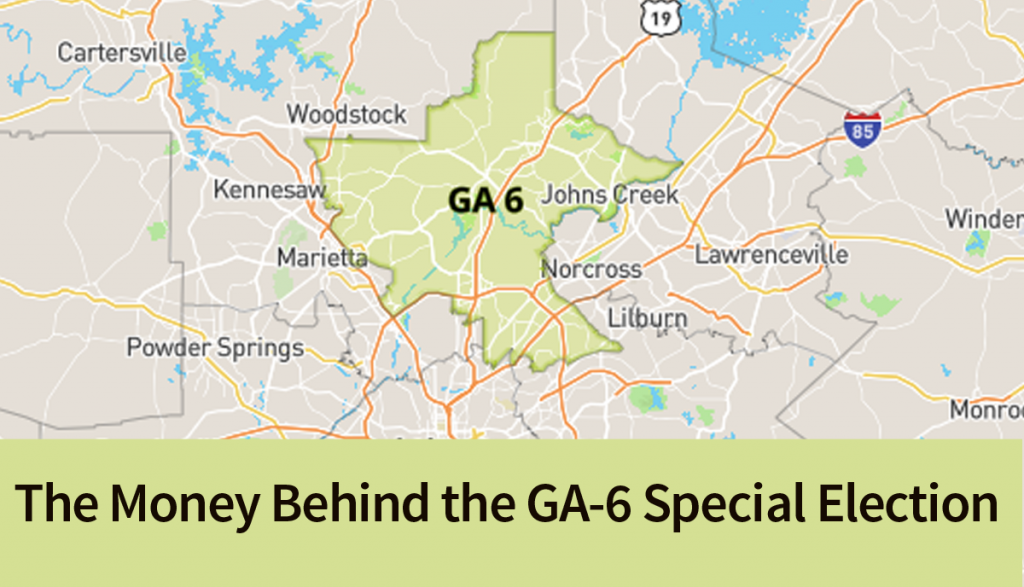 On April 20, Georgians went to the polls in the special election for the sixth congressional district. The top two candidates emerging from the 18-person race were Jon Ossoff (D) and Karen Handel (R), and it is now on track to be the most expensive House race ever.

Most media attention focused on the $8.3 million Ossoff raised through the March 29 reporting date. However, how much did the 11 Republican candidates raise, and how much did they spend? Who made independent expenditures in the district and which candidate did they support or oppose?

All the data for campaigns included in this post came from the FEC reporting period that ended on March 29. For the Handel and Ossoff campaigns, the next fundraising hauls won’t be reported to the FEC until June 8, 2017. The remaining campaigns will submit reports by July 15. Information related to independent expenditures is more up-to-date due to different filing requirements from the FEC.

While Ossoff’s haul is impressive for a congressional district, the campaign admitted that 95% of all donations came from out-of-state, including $1.3 million from the liberal blog, Daily Kos. The Atlanta Journal-Constitution reported that $500,000 came from California, $400,000 from New York and $160,000 from Massachusetts.

Of the total raised, $5.6 million came from under $200 donors. This includes nearly $40,000 in bundled donations from the League of Conservation Voters.

Altogether, Ossoff’s war chest raised 53% more money than the combined donations and loans from the 11 Republican candidates for an advantage of $3.9 million.

Among the field of 11 candidates running for the GOP, only two did not loan themselves money – Karen Handel and Bruce Levell. The remaining candidates made loans ranging from nearly $8,000 for Mohammad Ali Bhuiyan to almost $2 million for Dan Moody, who received 9% of the vote.

However, Dan Moody was the Republican who spent the most. Out of his nearly $2 million war chest, he spent $1.9 million through the March 29 deadline. He had the second highest burn rate of $21,941 spent per day.

The Cost of Votes

While millions poured into GA-6 from Democrats hoping to push Ossoff over 50%, his campaign didn’t spend the most per vote. He ended up receiving 48% which broke down to $65 per vote.

Handel, with the benefit of a high name ID in the district due to two previous campaigns, came in with 20% of the vote. She spent $7.36 per voter, the least of any of the 18 candidates in the race.

If the $9.6 million spent between January 1 – March 29* by the campaigns seems staggering, outside PACs and party committees spent an additional $13.3 million up through the election on April 20.

Because Georgia had 11 different Republicans vying for the open seat, some conservative-leaning PACs made independent expenditures opposing Republican candidates for a total of $1.5 million. However, the majority of IE spending has focused on Ossoff. To date, $9.4 million has opposed his campaign while only $550,000 has supported him.

By comparison to other states with special house races, a total of $182,000 was spent in Kansas for the April 11 election. To date, $3.2 million has been spent on IEs in Montana for the May 25 election and $130,000 in South Carolina for the June 20 election.

*Because filing requirements are different for campaign committees and independent expenditures, information is available on IEs made between March 30 through the present.