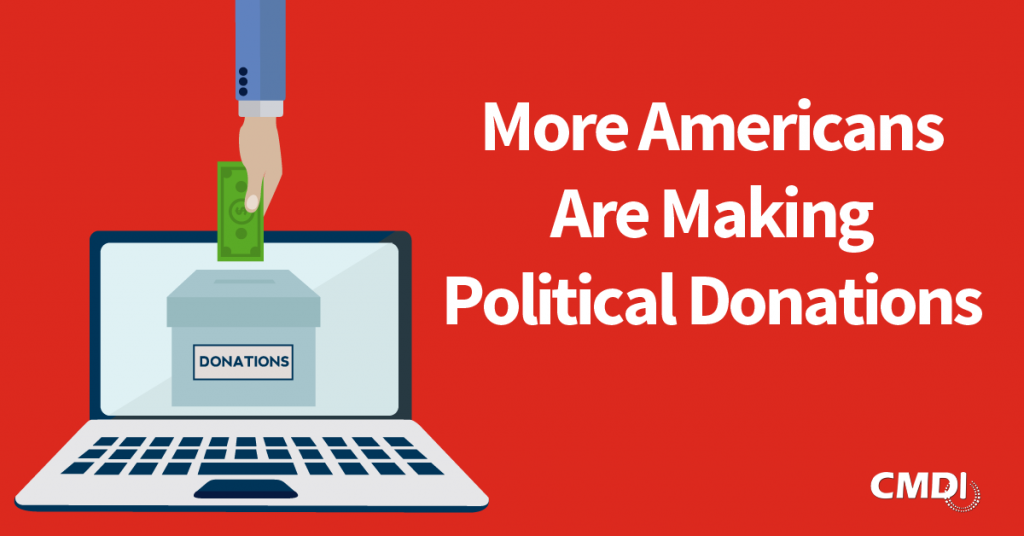 Good news for political fundraisers! According to data from the American National Election Studies and Pew Research, more Americans made donations to political candidates and parties in 2016 than previous years. Since 1992, the percentage of Americans donating to at least one political candidate, party, or PAC increased from 11% to 15% in 2016.

Since 1992, the number of Americans donating to an individual candidate doubled from 6% to 12%.

Despite heightened media attention, contributions to “outside groups working to elect or defeat a candidate – such as political action committees” only grew from 3% in 1992 to 6% in 2016.

Who is most likely to donate?

Since 1992, Republicans held a slight edge in likely donor with 15% over 14% for Democrats. However, in 2016, Democrats were twice as likely to donate during the election.

While President Trump had fewer numbers of donors, he raised significantly more money from under $200 gifts than Hillary Clinton, Bernie Sanders, and both of President Obama’s campaigns.

The Campaign Finance Institute reports that Trump raised $239 million from small donors through a joint fundraising committee with the Republican National Committee. This amounted to 69% of individual donations, and 58% of total funds raised.

How much do they give?

Overall, this is a good time for Republicans raising money. With the rise of online donations and small-dollar contributions, political giving is far more accessible and common than it was 25 years ago. While only 15% of Americans from both parties are likely to give, more and more people are engaged and helping candidates. This is good news for first-time candidates looking to build a list and start a housefile.

Given the continued success of Republican fundraising during an off-year, there’s no reason for 2018 campaigns to wait until January to get started!