What does that mean? A Glossary of Political Jargon 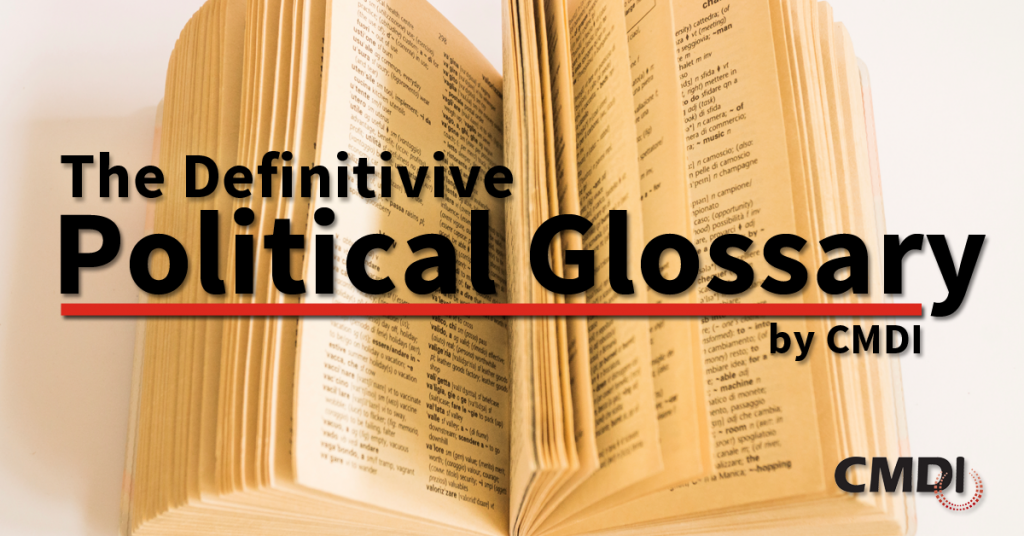 Does it seem like the world of politics has its own language? Have you ever read a newspaper editorial or listened to the news and heard an expression that you didn’t understand? Have you ever wondered how the colorful words used in political commentary were coined?

Modern political jargon is an odd mixture of historical slang, carefully-defined legal terms, Civil War history, Shakespearian references, and Saturday Night Live jokes. Many of our commonly used expressions, like gerrymandering, evolved from sarcastic nineteenth century newspaper editors. A few words, such as backbencher or lobbyist, originated in British Parliament long after the American Revolution. Other expressions, like bully pulpit or stemwinder, were popular with positive connotations when they entered the American lexicon.

Read through CMDI’s new Definitive Political Glossary for explanations of words or expressions you’re likely to encounter on the campaign trail or scroll down to see some of our favorite entries. At the very least, you’ll pick up a few words to use the next time you play Scrabble or Trivial Pursuit.

Following a group that has a growing number of supporters. A bandwagon literally carried a group of musicians in a parade, and the term was associated with politics in 1848 after Dan Rice, a popular circus clown, used his bandwagon and music for political campaign appearances. As the popularity grew, politicians aimed to get a seat on the wagon and be associated with the popular performer.

A state that historically tends to vote for the winning candidate, perhaps because it is, demographically, a microcosm of the entire country (e.g. Ohio). The term derives from the name for a sheep which shepherds would fit with a bell. By listening out for this sheep, the bellwether, shepherds could locate the position of the entire flock.

Empty or nonsense talk. The term originated after Rep. Felix Walter gave a long-winded speech about the Missouri Compromise in 1820. He argued his constituents sent him “to make a speech for Buncombe.” His speech was then referred to as “buncombe” or pointless. The word grew to mean “vacuous speech” and was eventually shortened to “bunk.”

Evolved as a reference to fish bait. It lures volunteers and voters to a political campaign with swag such as bumper stickers, t-shirts, drink koozies and buttons.

The inability of government to accomplish anything because special interest groups block change.

The practice of drawing political constituency maps to increase a specific candidate’s or party’s advantage in a subsequent election. Political district maps are typically redrawn once a decade following the completion of the census by the state legislature.  The party in power in a state government uses sophisticated mapping and statistical data to redraw the map to ensure its candidates have the best chance of success, usually by diluting the electoral strength of the opposition party’s supporters. The Library of Congress notes the term originated in 1811, when Massachusetts Gov. Elbridge Gerry signed a bill that created a new district resembling a salamander, provoking the Boston Gazette editor to say, “Salamander? Call it a Gerrymander!”

An alliance of groups with an interest in a policy area: bureaucrats from the relevant agency, legislators from appropriate committees, and interest groups affected by the issue.

A strategy of using a politician’s controversial statements to attract campaign donors.

Wasteful government expenditures that lawmakers secure for their local districts in an attempt to gain favor with voters or campaign contributors. The term originated after the Civil War due to the practice of plantations distributing rations of salt pork to slaves from large, wooden barrels as a reward for special occasions.

The scientific study and statistical analysis of elections and voting. The term was coined in 1952 by Oxford Professor R. B. McCallum and is derived from the Greek word psephos, which means pebble, and references the pebbles used by the Ancient Greeks to cast their votes.

A political diversion which draws attention away from something of significance. The term originates from an 1807 article published in the Weekly Political Register by William Cobbett where he critiqued the British press for falsely reporting Napoleon’s defeat. He wrote that he had once using a red herring to confuse hounds that were hunting a hare, and added, “It was a mere transitory effect of the political red-herring; for, on the Saturday, the scent became as cold as a stone.”

A false, dirty or slanderous story used for political advantage, usually about a candidate seeking political office. The term is believed to have originated in 1844 when the fictional Baron von Roorback wrote Roorback’s Tour Through the Western and Southern States to attack the campaign of then-Governor James K. Polk.

A politician who will go to any lengths to win public office, regardless of party affiliation or platform. The term dates back to 1895 when it was used in the Columbus Dispatch. It was revived again in 1952 by President Harry Truman.

An unusual political alliance that is derived from Shakespeare’s The Tempest when Trinculo says, “There is no other shelter hereabout: misery acquaints a man with strange bedfellows. I will here shroud till the dregs of the storm be past.”

A rousing political speech that galvanizes a crowd to take action. The term originated in the mid-1800s after a stem-winding watch was invented, and the phrase came to convey “excellent” or “outstanding.”

Bookmark the Political Glossary and use it when unsure of what a political word or phrase means. The next time you play pub trivia or need to provide a sound bite for a reporter, you’ll thank us.