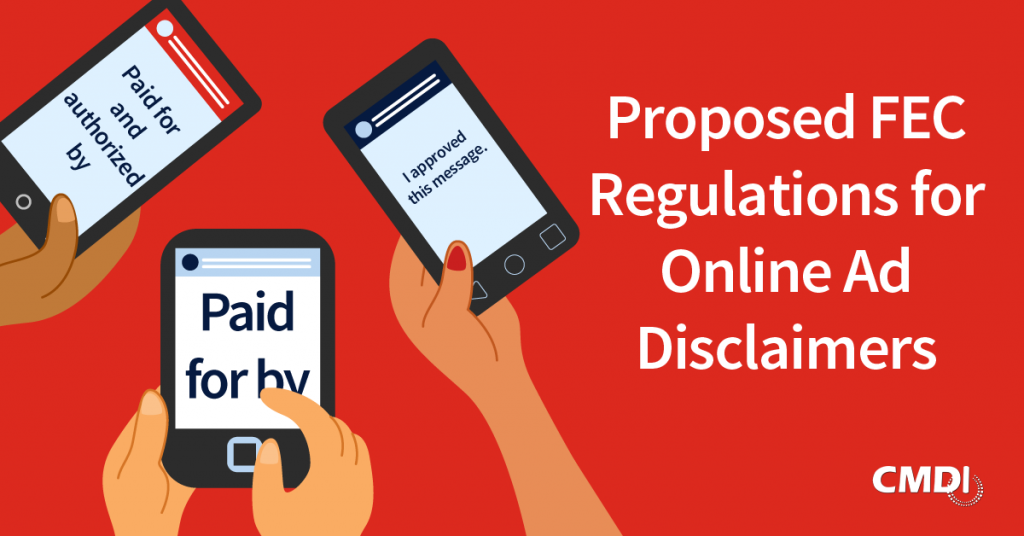 The questions surrounding the FEC’s regulation of online ads will soon be answered.

In March, the Commission released a long-awaited proposal of draft regulations for internet communication disclaimers. The proposal is currently open for comments and will be discussed at a hearing on June 27.

The draft contains two different proposals – Alternative A and B as well as two “adapted disclaimer” options that explain when a truncated disclaimer would be allowed. Despite only having four commissioners, which requires a unanimous vote for any action, the proposal has enough similarities that it’s likely something will be passed. Inside Political Law notes:

While the draft notice contained two proposals for how to revise existing regulations, they share many common points, making a new final rule more likely.  The two proposals more closely resemble variations on solving a common problem than competing agendas.

What are the revisions to the definition of “public communication”?

In 2006, the FEC changed the definition of public communication to include internet communications “placed for a fee on another person’s Web site.” This proposal would change the definition by replacing “Web site” with “internet-enabled device or application.” The change aims to reflect how the web has changed in the past 12 years and provide the flexibility to cover new technologies in the future.

During the March meeting, the Commissioners expressed a desire to hear opinions and feedback on this definition. They wrote:

The Commission invites comment on this proposal. Is it clear from the proposed language that both the placement-for-a-fee requirement and the third- party requirement would apply to websites, internet-enabled devices, and internet applications? In this rulemaking, the Commission is not considering any change to the definition of “public communication” other than the terminology that should replace “Web site” as used in the definition.

What ads will the disclaimers affect?

The proposal is clear that disclaimers will only be required for express advocacy ads. Page 15 notes:

Disclaimers are required for any “public communication” that contains express advocacy or solicits a contribution, and for all public communications by political committees. The Commission wants to make sure that any change to the definition of “public communication” in 11 CFR 100.26 is appropriate as applied in the disclaimer rule, given the complexities of internet advertising and the rapid pace of technological change.

The express advocacy limitation is important to note since The Honest Ads Act, a bill written by Senators Amy Klobuchar (D-MN) and Mark Warner (D-VA), would make fundamental changes to the current definitions and expand regulatory requirements at the FEC.

What are the differences between Alternative A & B?

Broadcasting & Cable notes that Alternative A is the proposal favored by Democrats. It takes the current framework for radio, TV, and print ads — including the “stand by your ad” requirements for radio and TV — and extends it to the internet without much flexibility for space or time limitations. They wrote:

A is based on the assumption that internet ads with audio or video are indistinguishable from radio or TV ads other than the means of distribution–many different formats on many different tech platforms.

A briefing from Perkins Coie provides additional details on Alternative A:

Republicans on the Commission favor Alternative B, which is designed to offer more flexibility for rapidly-changing technologies. According to Broadcasting and Cable, “Option B is based on the premise that the internet is a unique medium with unique challenges, thus the general requirement without the ‘stand by this ad’ requirement of TV and radio ads.”

What are “Adapted Disclaimers”?

In an effort to end questions over the “small things” exemption, both proposals include an option for an “adapted disclaimer.” However, both options include a lengthy list of questions and mention that elements from both suggestions could be combined in the final rules.

This adapted disclaimer would be used on a text or graphic communication when the full required disclaimer can’t fit on the face of the communication “due to external character or space constraints” that are “intrinsic to the technological medium.” However, the adaptive disclaimer is not allowed on ads with an audio or visual component even if space limitations prevent the full disclaimer.

The adaptive disclaimer would require:

This shorter disclaimer can be used when the full version would occupy more than 10% of the overall time or space of a communication. Alternative B is permitted to be used when an ad contains an audio or video component. The 10% bright-line rule depends on the type of ad:

The Alternative B adapted disclaimer must include:

When will it be implemented?

It hasn’t been determined when the new disclaimer rules would take effect, nor is it known when the Commissioners will vote on them. Due to federal rulemaking policies, the new rules couldn’t go into effect until at least 30 days after a vote.This would be a major change affecting every federal race, party, committee, and PAC within 100 days of Election Day on November 6. If new regulations are passed sometime after June, it is likely that online disclaimers won’t be required until after the 2020 cycle starts in January 2019.

Given the participation and cooperation of the commissioners, it appears that some kind of regulation will be passed. It is important that the FEC receive comments from those who will be affected. Comments can be added to the public record through May 25, 2018.