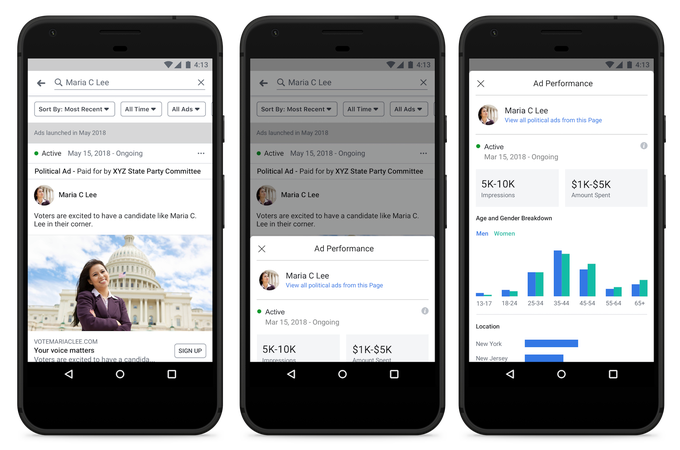 If you work for a political campaign, PAC or nonprofit you probably noticed changes on Facebook’s Business Manager when you tried to place an ad.

On May 22, the social network implemented sweeping changes for ads it considers political on both Facebook and Instagram. This new, controversial policy was announced last October after Facebook revealed that the Russian-affiliated Internet Research Agency used the platform in their attempts to influence the election. The new policy brings significant changes, and Facebook anticipates losing money on ads this cycle. Changes include:

• A verification process for employees placing political or issue ads.

• Adding a “sponsor” label to all political and issue ads.

• Classifying any issue ad as political.

• Including any ads mentioning the name of a current or former office holder at federal, state, county, and local levels, as political.

• Including all ads published on or after May 7 in a publicly searchable database.

• Requiring a “paid for by” disclaimers on all ads classified as political.

As advertisers adjust to the new rules, more information is coming out that details what these new policies require. Facebook has also created a Blueprint class to guide users through the verification process and set up a detailed FAQ on these new policies.

What is the verification process?

1. Submitting a HOME address for a letter with a verification code to be mailed. P.O. Boxes and businesses addresses are not accepted. 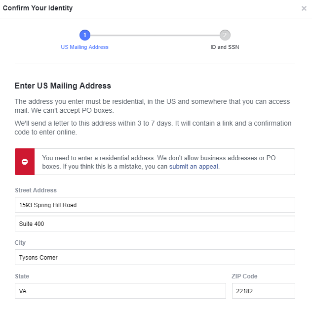 2. Upload front and back photos of a government-issued ID, such as a drivers license or U.S. passport.

3. Enter the last four digits of your Social Security Number. 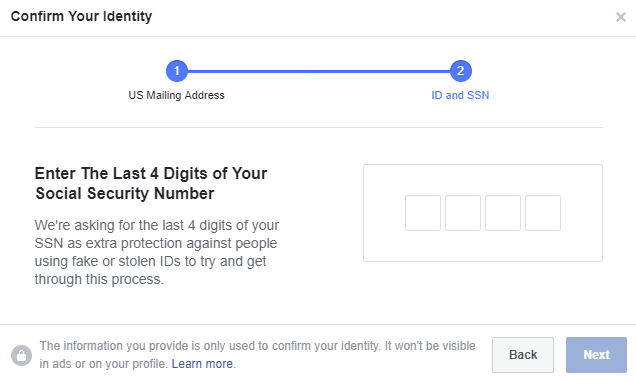 Once these three steps are completed, Facebook will mail the verification code to your home. Once you enter that number, your organization will be permitted to place ads. 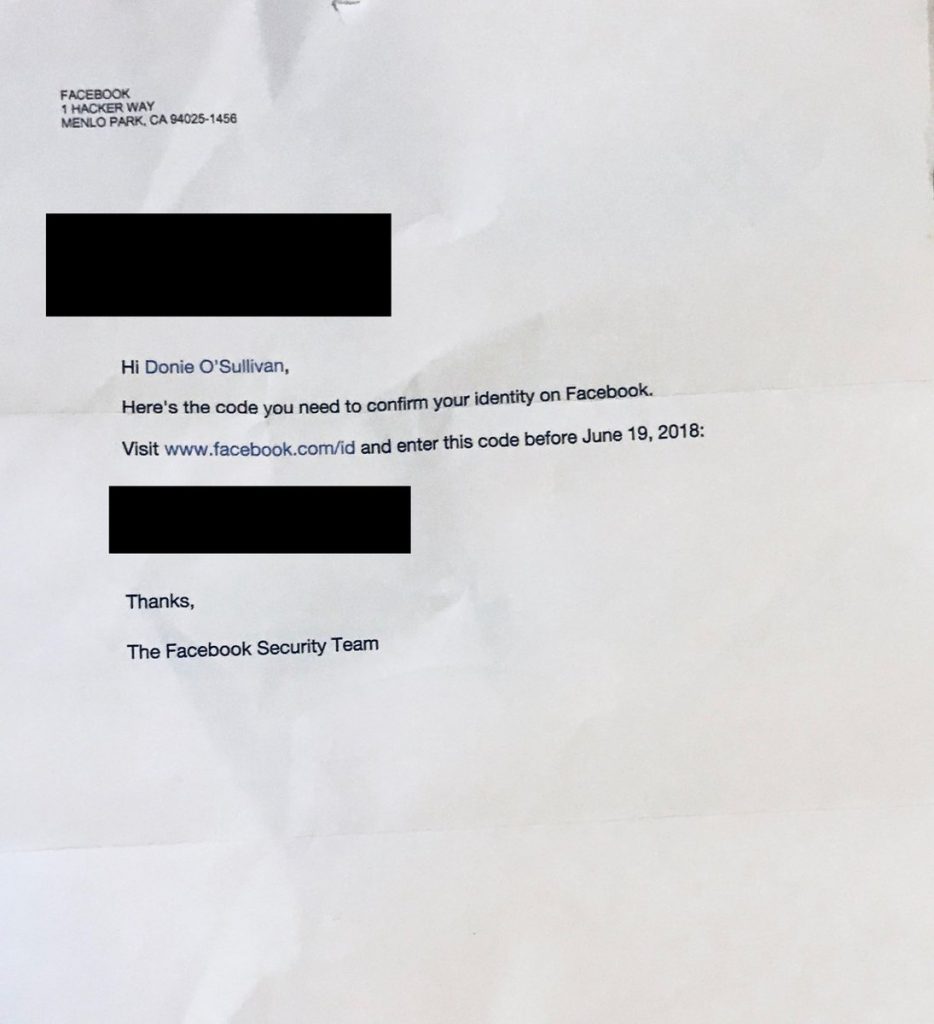 Facebook promises that all information provided for verification is normally deleted within six weeks. 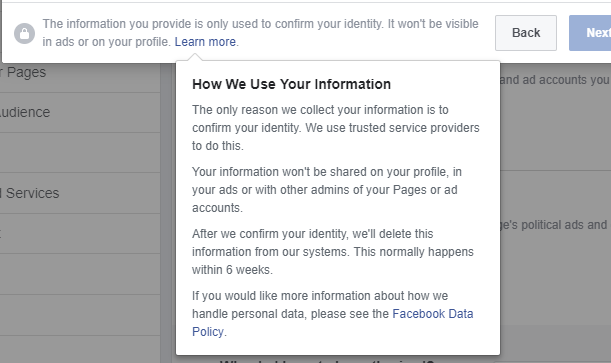 How will political ads be labeled?

All ads that Facebook considers political and ads naming a current or former office holder, will require a “sponsored” label. Even if the content of the ad is not political, such as an announcement for a Republican Party meeting, any ads from a political or issue organization will still require the verification process to be completed. 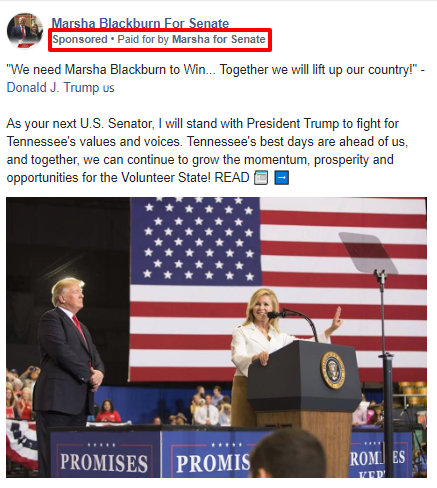 After media companies objected to their ads being labeled as “political,” Facebook removed the word from ads. Unlike the mock-ups and video that were released before the policy was implemented, all ads will now say, “sponsored” instead of “political ad.” However, media companies still have to complete the verification process and enter “paid for by” information on every ad. Yesterday, Facebook announced that they are developing a separate archive for ads from media companies. 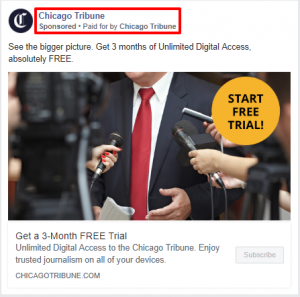 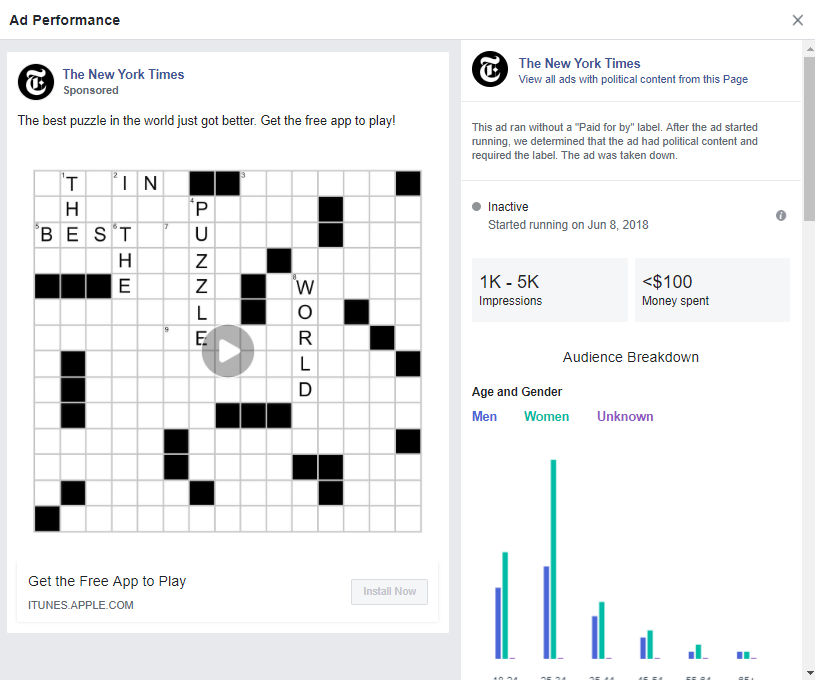 This ad for the New York Times Crossword app was rejected because the ad lacks a “paid for by” disclaimer.

What counts as a political ad?

Since many of the ads used by the Russians fell under what the Supreme Court classifies as issue ads, Facebook is classifying these as political. Based on their FAQs, a political ad:

Because of “national legislative issue of public importance in any place where the ad is being run” is broad, Facebook includes a list of 20 topics that could potentially be classified as political. They also anticipate that these ad topics will “evolve over time.” 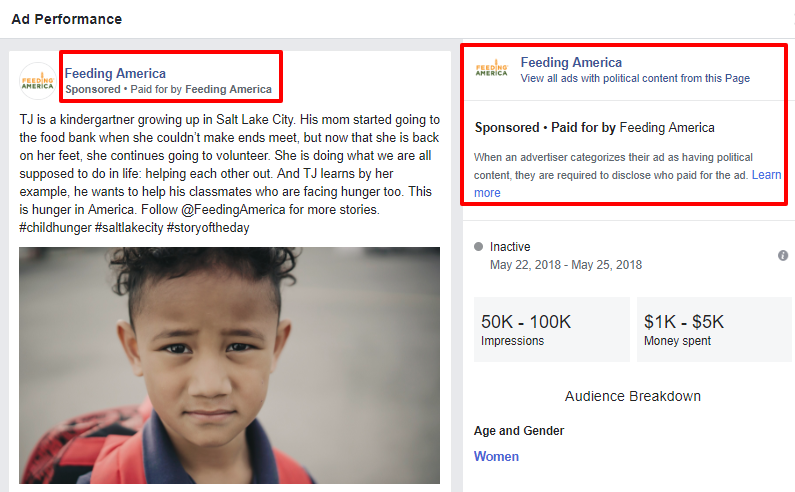 Feeding America, a national food bank organization, was required to go through the verification process and include a “paid for by” disclaimer because the organization falls under the issue of poverty. Even ads that do not contain any political content appear to need the disclaimer.

The topics are based on the Comparative Agendas Project, an academic program that seeks to classify global issues to make research easier. However, these topics are still broad and depend on context to determine if they are political. Ultimately, this policy will likely capture organizations that are not considered “political,” such as food banks, after-school programs, community health centers, or pregnancy centers. 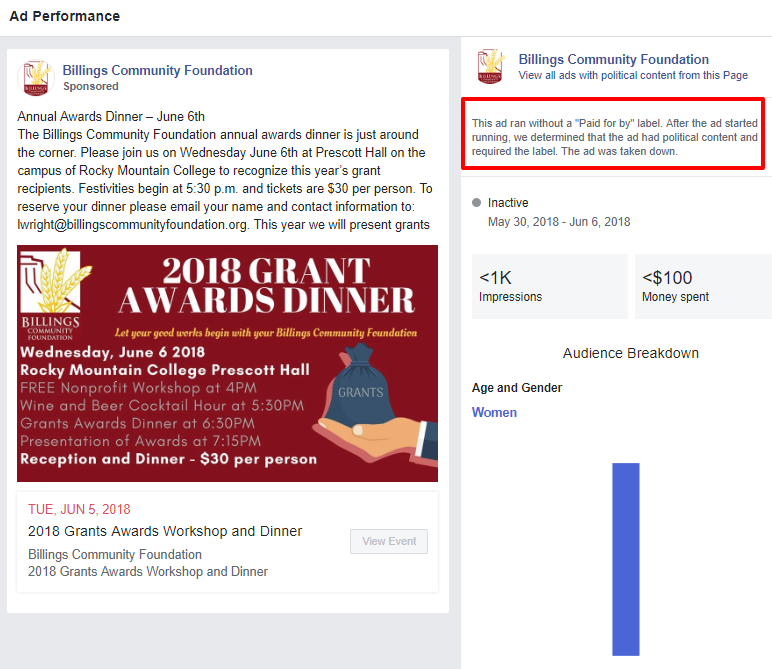 Facebook rejected this ad from the Billings Community Foundation in Billings, Montana for not having a disclaimer. It was determined that this ad had “political” content and was removed.

In a Hard Questions post on May 24, Facebook's Katie Harbath explained that this should not happen:

Here’s how it works in practice. Education is one issue listed among the 20. But our policy would only apply to those ads trying to achieve a political purpose, for example, education reform or a new student loan policy, not ads for a university or scholarship. Other cases are more nuanced. An ad from an immigration lawyer would not be tagged as an issue ad. But if essentially the same ad were to also advocate for immigration reform in any way, it would be considered political and be subject to our policy.

Facebook explains that policing these ads will be reactive. If a user reports an ad for a pregnancy center that offers free diapers, Facebook will review the content and decide if it should be political or not. They also acknowledge that this reporting system can be used to coordinate attacks against organizations, but offer few alternatives besides notifying the Public Policy and Elections Team if this happens.

Facebook is using the OpenFEC API to build a database of federal officeholders and are relying on Ballotpedia to create a list of state and local officeholders. Facebook has previously stated this may, “include people who aren’t actively running for office.” However, staffers for the company have not answered how far back this data base will go. Based on conversations with Facebook staff, these scenarios would prompt ads to be labeled as political:

This ad from homeless shelter and food pantry was flagged by Facebook because it thanked two local elected officials. In order to run it, the organization would need to be verified and include “paid for by” language.

Given the number of past and present officeholders in the U.S., this policy will potentially affect thousands of people. However, this is the vaguest area of the new ad policies and unlikely companies, such as Bush's Baked Beans and an animal shelter in Long Beach, California, got caught in the new rules. Additional guidelines will likely be made as situations emerge. As seen below, any ad that mentions a town or business named “Clinton” was rejected, including ads for summer camps, gyms, pharmacies, doctors, car dealerships, a Rotary Club, and a farmers market. 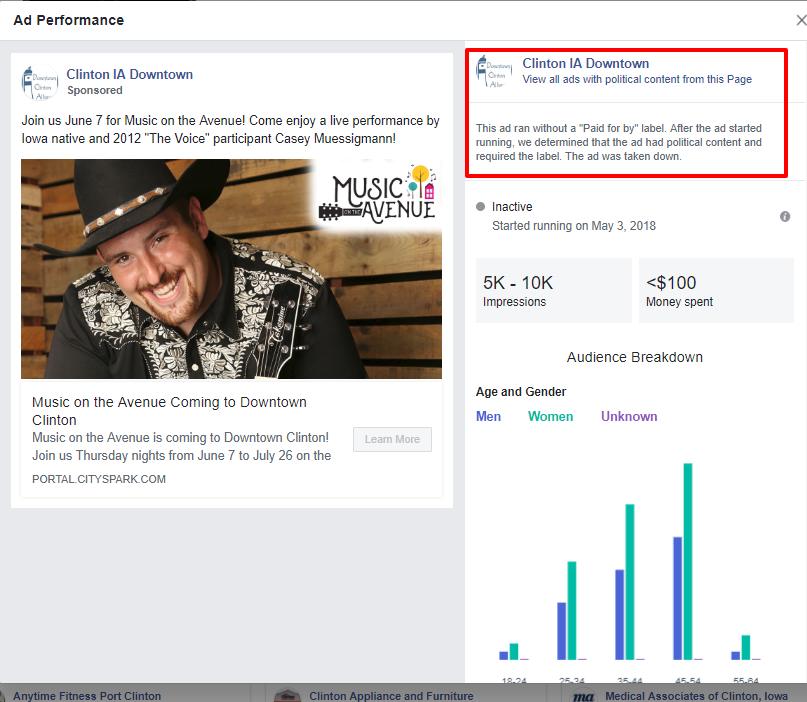 A number of ads from Clinton, IA were rejected. 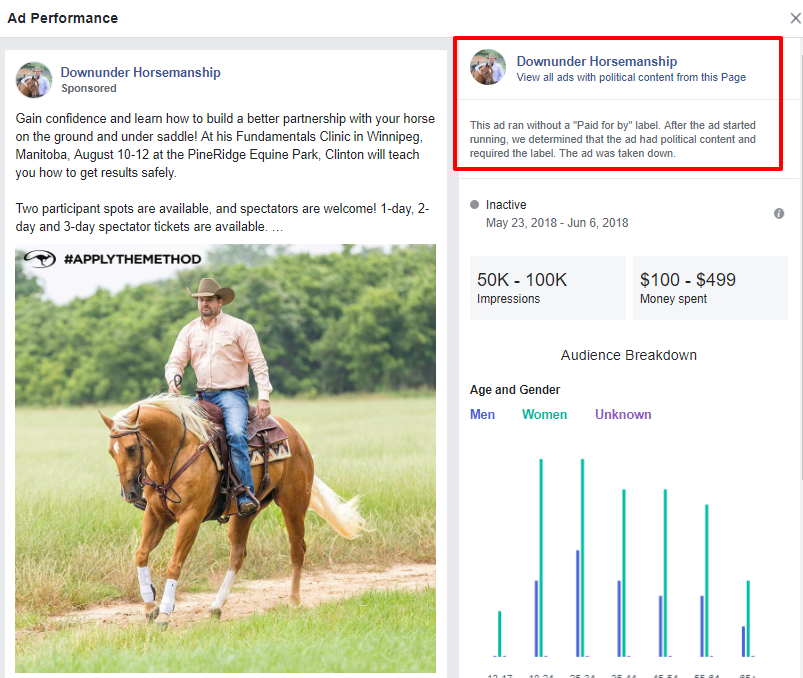 This ad for an event in Manitoba, Canada was rejected because the man in the photo is named Clinton.

What information is disclosed about the ad?

When a political ad is published in the feed, Facebook will provide links to additional information that includes a range of how much was spent on it, the state where it was targeted, and demographic information, such as age and gender.

Facebook will not reveal additional information on targeting since many ads use custom audiences. Those are typically based on email lists belonging to individual organizations. 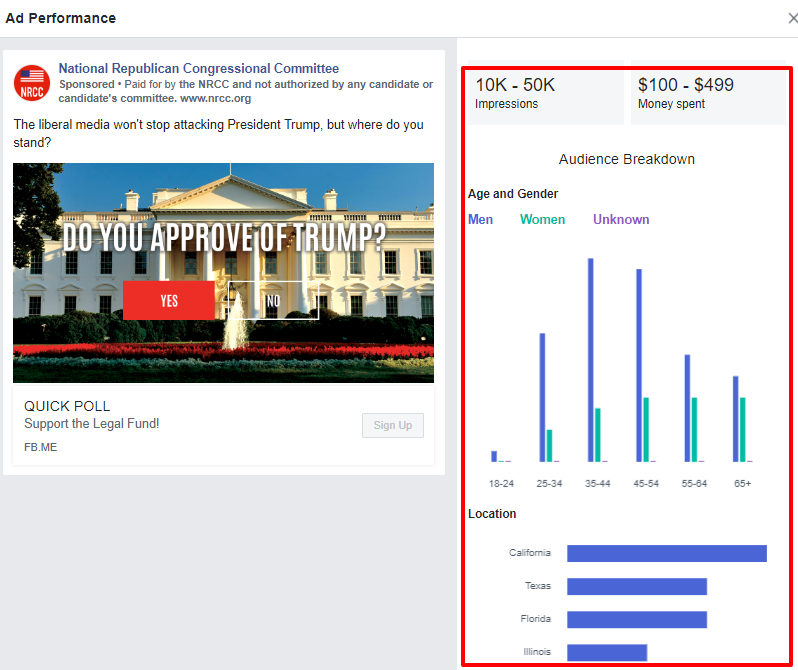 What ads are included in the searchable archive?

In  addition to providing information on ad data when it is delivered in an individuals feed, Facebook built a searchable database for all political ads that were published on or after May 7.  Each ad in the political archive will contain the following information:

To access Facebook's political ad archive, visit https://www.facebook.com/politicalcontentads. From the main search page, you can enter any keyword. 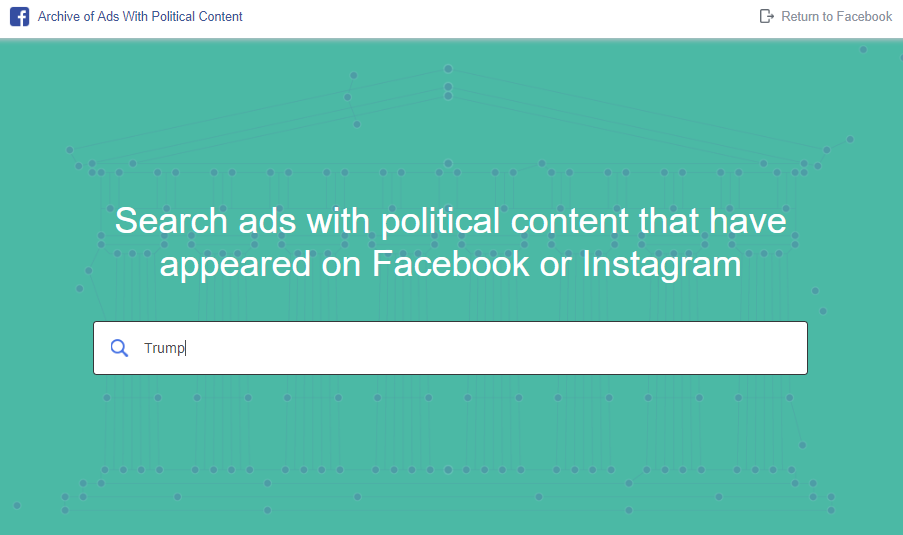 Once you enter your search terms, your results will appear. In this case, there are more than 82,000 ads containing “Trump” that have been submitted to Facebook since May 7.  If you want to see how an individual ad is performing, click on the blue “See Ad Performance” link under each ad. 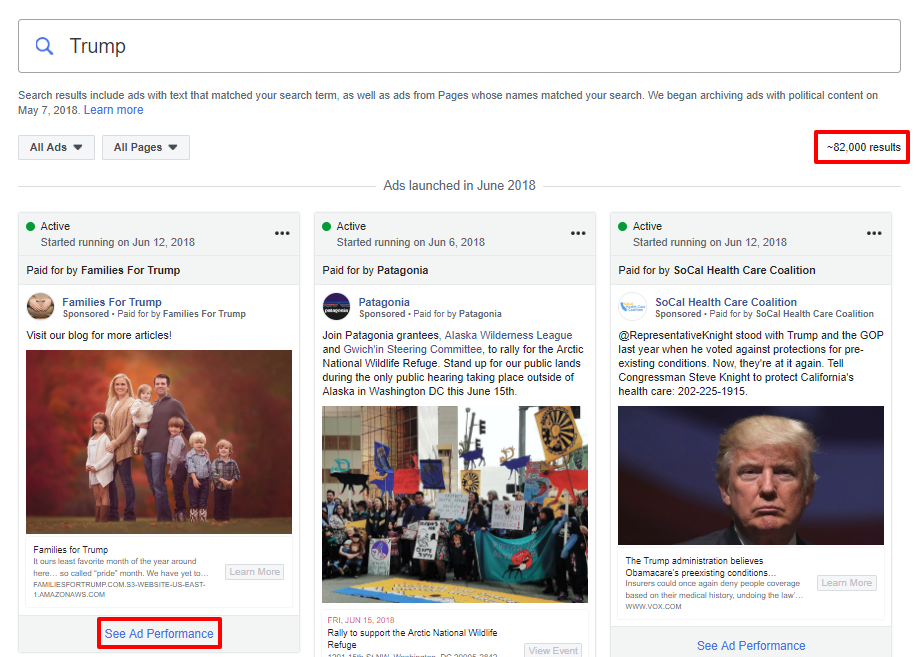 You can filter these results through the “All Ads” drop-down menu at the top and choose between active and inactive ads. Inactive ads include all ads that were rejected by Facebook for breaking content standards and ads that were flagged for needing “paid for by” disclaimers. 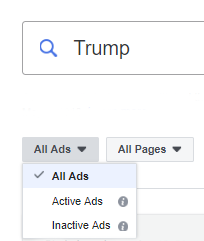 You can also narrow searches by looking for ads from a particular page. Use the “All Pages” drop-down to select certain pages or search for pages by keyword. 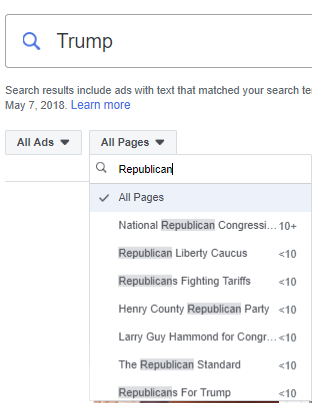 At some point this summer, Facebook also will add a section on all pages that shows all ads connected to that page. 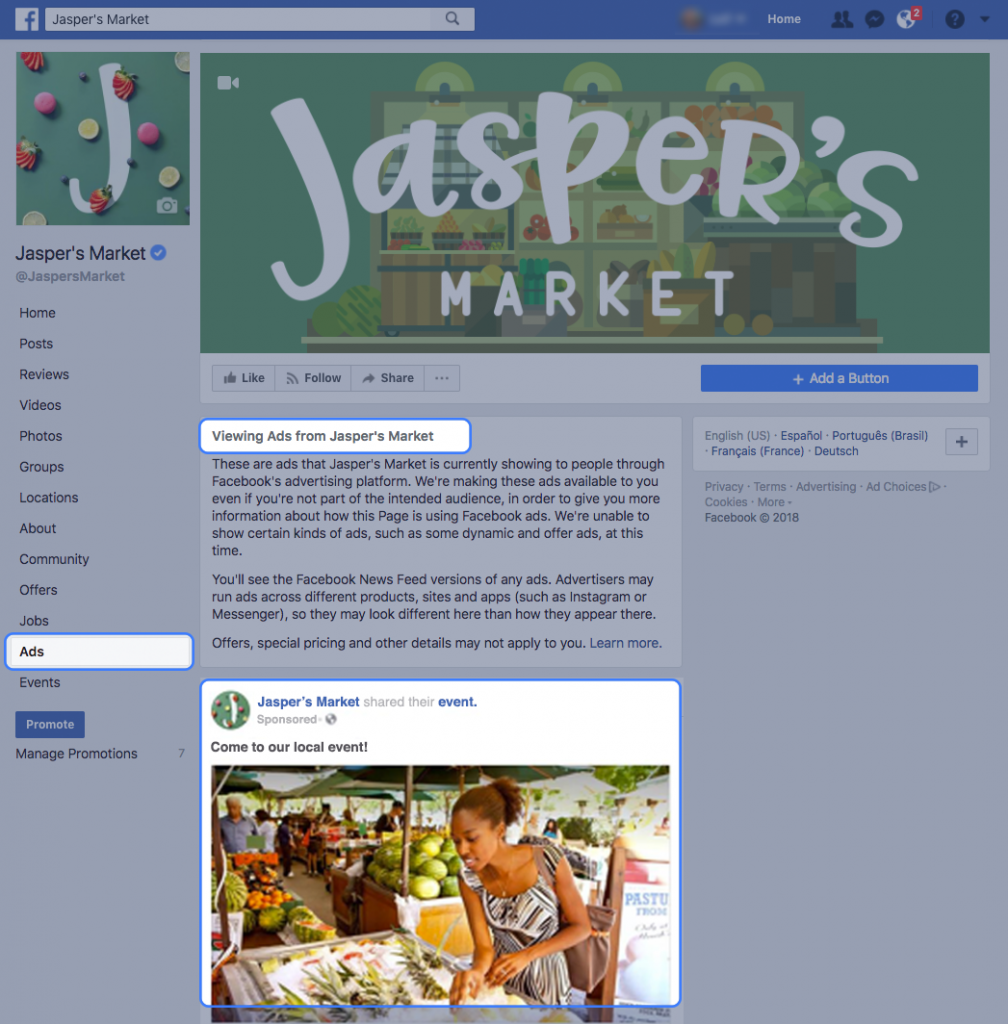 In her Hard Questions post, Harbath provided a few more details on how Facebook screens for political ads:

To enforce the policy, we’ll check both the images and text in an ad, and who is being targeted. And, if the ad sends a person to an outside website, we’ll check the landing page as well. In addition, our technology can identify election ads and prevent them from running if the advertiser hasn’t been authorized. These systems can also identify some issue ads and will get better the more ad reviews we do.

The platform primarily depends on voluntary compliance during the creation of the ad. When setting up an ad in Business Manager, you must identify that it is either a political or issue ad. 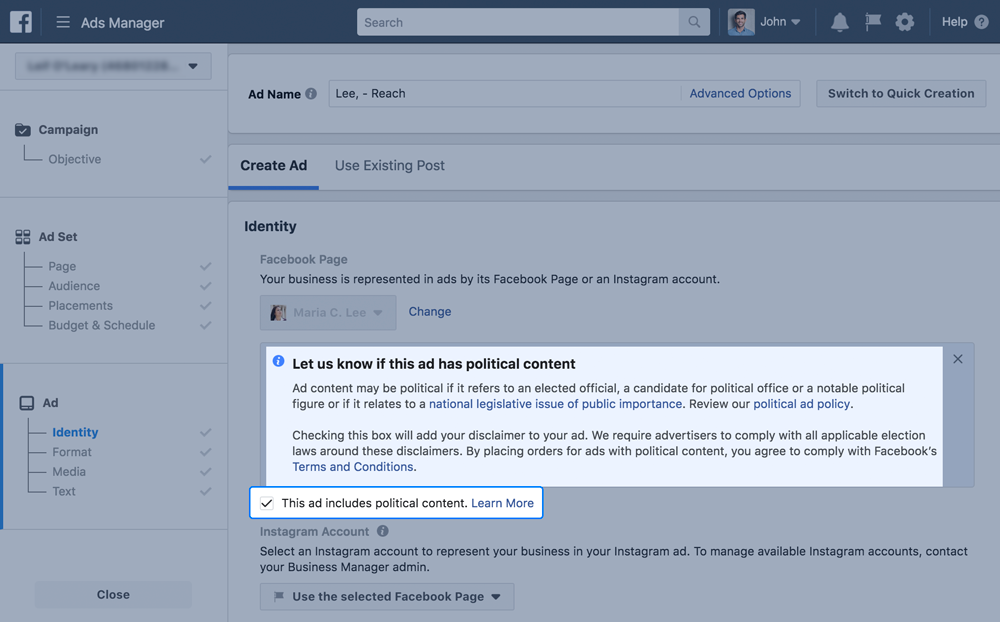 Business Manager will then provide space for you to include disclaimer language. 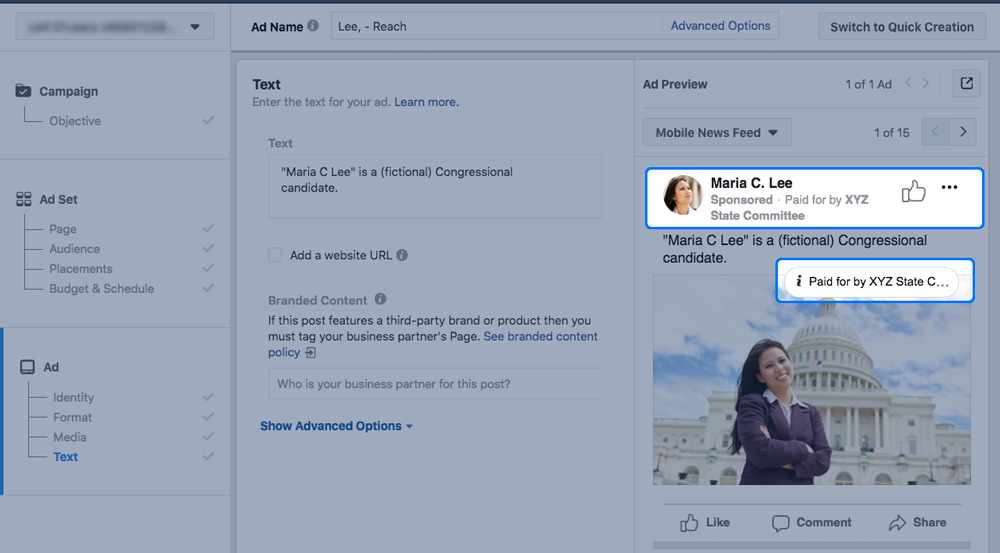 Ads still need to be approved by Facebook before they are published. If a political organization is not verified, their ads won’t be approved. Ads that users believe should be marked as political can also be flagged. These will be reviewed by Facebook’s Ad Review team and not one of the 10,000 people being hired to police content.

Are these policies final?

News about this new ad policy has trickled out since October and continues to change. A few weeks ago, Facebook announced that ads placed by media outlets would also contain political labels. However, this has received tremendous pushback from news media. Facebook responded by changing the label on the ad from “political” to “sponsored.”

Other organizations have also gotten caught up in the labeling issues. 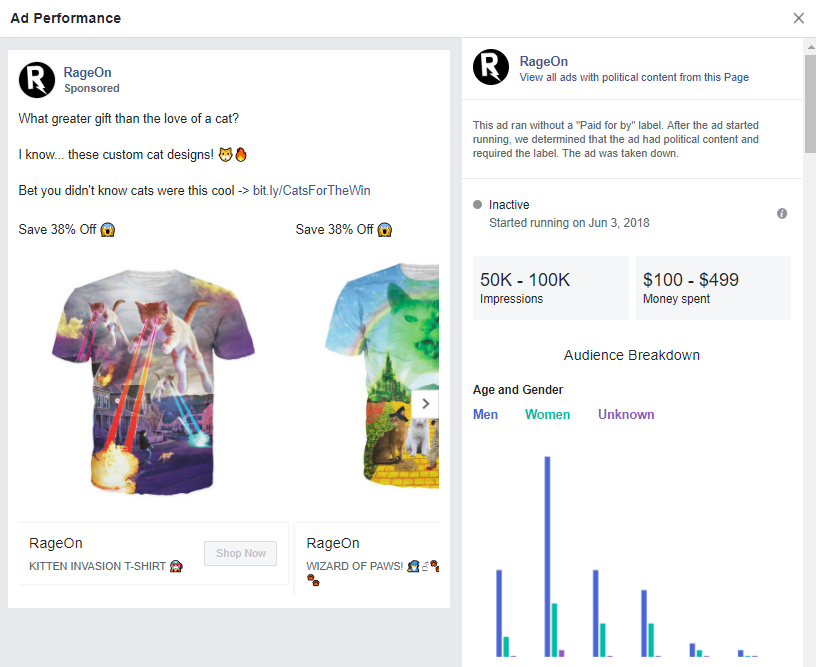 An ad for a “laser kitten” tshirt was rejected by Facebook because it did not contain a political disclaimer.

Facebook acknowledges that this is a learning process and ads will be unnecessarily flagged or that they might miss a few. Harbath asked for assistance:

We won’t always get it right. We know we’ll miss some ads and in other cases we’ll identify some we shouldn’t. We’ll keep working on the process and improve as we go. We’re also asking people to help us identify ads that might be problematic. If you see an ad with political content that doesn’t have a label, or any that you think may not be allowed, please flag it to us for review.

The company is also aware that the Federal Election Commission will hold a hearing on online ad disclaimers at the end of June. If they adopt new regulations, these changes could also affect how Facebook labels ads. Facebook’s election team encourages those placing political ads to be flexible and anticipate that policies will likely change.