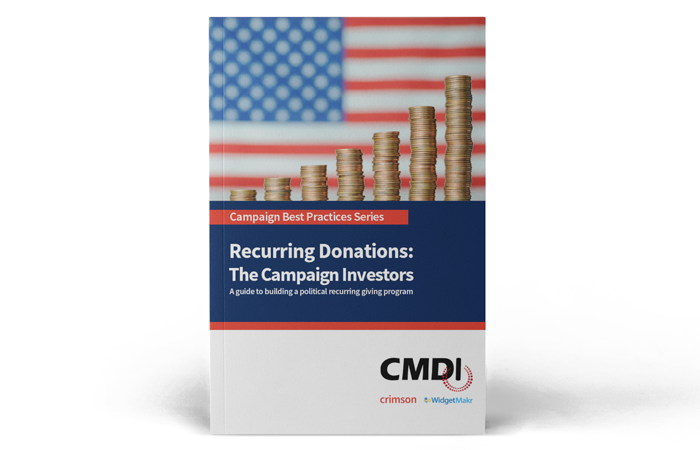 The answer is easy. For the same amount of work and messaging, it is possible to convert that $10 donation into $80 through recurring or monthly donations. Recurring donations are a simple, innovative way to boost your campaign’s fundraising efforts.  These gifts are automatically charged to donors’ credit cards at regular intervals chosen by the donor, such as every month from now until Election Day.

Most Americans making political donations give $100 or less. A Pew report found that 55% of donors reported giving $100 or less, and only 13% gave more than $250. Rather than asking for a one large donation, smaller monthly donations are far more feasible for most political donors.

While a donor might hesitate to write a check for $1,000, if recurring gifts are started early enough in the cycle, the same amount can be contributed over time. It’s easier for some donors to give a larger amount overall than they could give in a single, lump sum. For example, if $340 was donated each  month between April and November, that donor would reach the contribution limit of $2,700.

What are recurring gifts?

Once you have a donor committed to your campaign or committee, ask them to commit to setting up a recurring donation with a gift automatically charged to their credit or debit card at regular intervals. Most recurring gifts are made monthly, but they can be set up at more frequent intervals, such as a $10 weekly gift for six weeks.

If you are using WidgetMakr, or a similar online donation product, it is easy to enable recurring donations on the back-end, and you can customize the frequency of the donation and when the donation should stop.

If you want to learn how to incorporate a recurring donation program into your campaign, click here to download the guide from CMDI.