The Guide to What to Do After Election Day 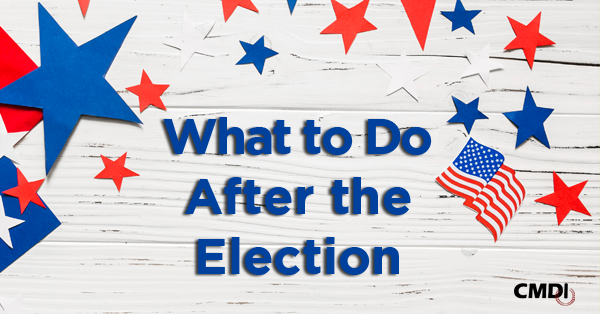 Election Day is over. What to you do now? See below for our list of suggestions for wrapping up a political campaign or listen to the recent episode on Advisory Opinions, “What to Do After the Election.”

Whether you won or lost, follow these suggestions to end your campaign on the right note with donors and volunteers.

• Online donations received after the election:

• If you win: change the disclaimer on all your fundraising pages to say that any donations submitted after Election Day will go towards the next election.

• If you lose with debt: Change your disclaimer to say that donations received after Election Day will go towards debt retirement.

• If you lose with no debt: REMOVE YOUR DONATION PAGE!

• Checks received after the election:

• Keep the envelope! You need the postmark to prove that it was mailed on or before Election Day.

• If it is from a fundraiser, you need proof or an affidavit that an agent of the campaign had the donation in hand on or before Election Day.

• At the very least, send a thank you email to your volunteers. If you have the time or money, have a small celebration with pizza or coffee to thank them for their free work!

• Your donors are your financial investors. Thank them for their contributions.

• If you won, you will need them the next time you are up for re-election.

• If you didn’t win, you might need them for a future run. It’s hard to thank people too much.

• Pull a list of your recurring donors and check the aggregate totals. Make sure that these donors are getting the same recognition as the ones who wrote out one-time big checks. Take the time to send hand-written notes or call them.

• CMDI also has a guide on recurring gifts that includes other ideas for thanking donors.

• If you won, let your list know how you plan to transition into office. At the federal level, you will have interest in jobs and internships. Let people know transition website addresses & information.

• If you lost, let people know what your plans are. If they donated, volunteered or simply signed up for your email list, they are curious. Thank them for their support and end on a positive note.

Schedule a wrap-up meeting with staff.

• Regardless if you won or lost, it’s smart to schedule a post-mortem with your staff. Go over what worked and what didn’t work. What mistakes were made and what successes you had. Where could you have improved?

• Make sure you write these down! The lessons learned from your campaign are invaluable insights for future candidates and your staffers if they continue in politics.

• Don’t be afraid to be honest and brutal. Post-mortem reports can be painful, but they will help candidates and staffers alike in the future.

• Make these reports available to your local party and staff.

Keep up with admin tasks.

• Collect forwarding addresses. If they were full-time employees, you will have to mail them a W2 for 2018. If they were independent contractors, they will need 1099. Check with your state to see what forms are needed for tax purposes.

• Cancel campaign credit cards. Make sure you aren’t left with charges from staffers after the campaign ends!

• Campaigns can’t move forward after the election until the books are balanced.

Keep up with FEC deadlines.

Click here for a downloadable PDF of FEC deadlines for 2018.

• If you filed a Pre-General report, you need to submit a Post-General.

• If you did not file a Pre-General report, you must submit one on Dec. 6.

• Everyone needs to file a Year-End Report.

Plans for what to do with your campaign committee after Election Day depend on two factors: what the candidate plans to do and if you have debts or leftover funds. Please refer to the FEC's guide on Winding Down a Campaign for additional information.

If you have leftover funds:

The most common tool for candidate committees that have money leftover after an election is to convert it to a PAC. The FEC does not allow active principal campaign committees to convert to a multi-candidate PAC, so they can only do this as an alternative to terminating the campaign.

To convert to a multicandidate committee, you must file a new Statement of Organization with the FEC, change the name, and start following PAC reporting requirements. The new PAC is still responsible for paying any debts and responding to RFAIs that occurred while it was an active campaign.

2. Remain an active campaign after the election.

The main downside to converting from an active campaign committee to a PAC is the candidate decides to run for office again, the PAC can only contribute $5,000 to the new candidate committee. The FEC has specific rules about what these dormant campaigns can spend money on, but they haven’t policed them.

Earlier this year, a major investigation by Florida media drew attention to Zombie campaigns. Of the 102 campaigns that were investigated, many of the candidates had turned into lobbyists and were using their active campaign chests for donations. The investigation made headlines and prompted the FEC to indicate they will place additional scrutiny on Zombie campaigns starting in 2019.

If your candidate has remaining funds and decides to remain an active campaign in case of a future race, be aware that you must continue to submit FEC reports and be very careful how funds are disbursed.

3. Shut down the campaign committee:

If the candidate won, he or she can use left over funds to pay:

• Moving expenses to Washington, D.C. and other transitional costs

If a candidate won or lost, he or she can use left over funds to cover these categories:

• Purchase gifts of nominal value to people who are not members of the candidate’s family.

If a candidate wishes to shut down the committee entirely, follow the FEC’s guide on Terminating the Committee. A special Termination Report will need to be filed and additional information provided.

If you have debt:

• The FEC does not allow a campaign committee to wind down if they still have debt.

• Check the FEC’s guides on debt repayment for loans and outstanding bills. The FEC has rules on how to pay different types of debts and negotiating settlements.

• There are special rules for fundraising to retire debt.

• Remember that as long as your campaign carries debt, you will have to continue filing reports.

Decide how to handle campaign assets.

The FEC also has rules and guidelines for how to handle the sale of campaign assets and how to report the proceeds of those sales. There are two big types of assets:

1. Physical assets: What do you plan to do with the leftover office equipment and supplies? If you plan to run again in the future, it might make sense to hold on to them, but where will you store it? If you lost, it probably makes sense to have a fire sale on those supplies. How will you run the sale and track money.

2. Mailing lists:Mailing lists have a monetary value. Decide who owns this asset and how it will be used. Will it be sold or transferred? Will there be a list broker? Will it be given to the state or national party?