Is the FEC Open with Only Three Commissioners? 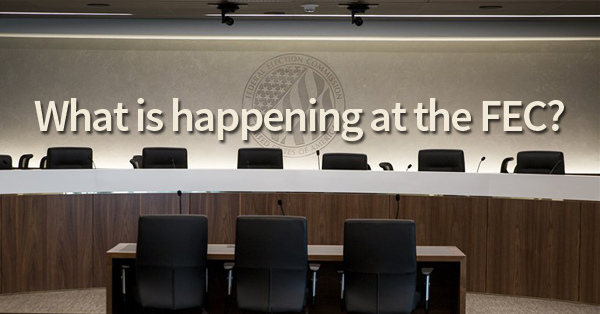 Recently, Commissioner Matthew S. Petersen resigned from the FEC, which was already down to four members. Since FEC rules require four members for a quorum, the Commission will not be able to vote to take any actions, issue new rules, offer opinions, or levy fines on committees that violate election laws.

Is the FEC open?

While many of the headlines are proclaiming that the “FEC nears shutdown,” “Federal Election Commission to Effectively Shutdown. Now What?,” or “The Election Watchdog That Can't Bark,” the lack of a quorum does not mean that the FEC is closed. The agency maintains full-time staff to carry out the mission Congress established with the Federal Election Campaign Act of 1971.  According to The Fulcrum, the FEC can:

However, the lack of a quorum does limit actions that require a majority vote by the commission, such as:

Despite the absence of a quorum, it is important to remember that filing deadlines will still be enforced, donation limits must still be followed, and new committees must still register.

But that doesn't mean the agency will completely go dark. “Public disclosure reports will continue to be due and will need to be filed by campaigns and PACs and committees, and those reports will be reviewed by the FEC staff just as they always are. So that's important,” said Toner. Similarly, the agency's popular website will continue to operate, allowing people to get information on campaign fundraising and spending.

Toner argues the agency's inability to act without four commissioners won't mean that campaign finance will become a “legal free zone.” There's a five-year statute of limitations on campaign finance violations, and FEC complaints can still be filed with the agency.

“At some point, presumably, the agency will regain a quorum,” said Toner, “and will be able take action on enforcement cases. So campaigns and committees still have to follow the law.”

Where are the nominees?

With Petersen's resignation, there are three openings at the FEC. By law, no more than three members can be from the same political party. The remaining commissioners consist of current chairwoman, Ellen Weintraub (D), Caroline Hunter (R), and Steven Walther (I).  In 2017 and 2019, President Trump nominated Trey Trainor, a Republican attorney from Austin, Texas.  Under FEC rules, Trump could nominate one more Republican for a total of three. What about the third opening? In a Fox News column, Former FEC Commissioner, Hans von Spakosky explained how the convention has worked in the past:

There are currently two empty Republicans seats and one empty Democratic seat on the commission.

The names of FEC nominees are sent to the Senate in pairs – one Republican and one Democrat.

Why? The way commissioners typically get confirmed is for the president, in consultation with congressional leaders, to refer nominees in pairs, one from each party. This reduces the incentive for either team to stonewall. Mr. Trump’s sending up a lone name was considered posturing, and no one seriously expected Mr. McConnell to act. With the agency now facing paralysis, the White House must huddle with lawmakers to find nominees whom everyone can live with, and the confirmations need to be fast-tracked.

According to The Fulcrum, Democrats have floated the idea of nominating Shana Broussard, who is currently an attorney working at the FEC under Commissioner Walther. With this deal, Democrats would approve both Trainor and Broussard for a total of five commissioners (two Republicans, two Democrats and one independent), which would restore normal order at the FEC.

A fresh start for the FEC?

Republicans in the U.S. Senate may have a different goal in mind for the FEC. A recent report from Public Integrity claims the delay in nominees and confirmation hearings stems from Senate Republicans wanting to appoint an entire slate of new commissioners. As the New York Times explains, this legally could be done:

The president could submit up to six nominations. On top of the vacancies, the terms of the three remaining commissioners have expired, though the members can stay on until their successors are confirmed. But at the very least the vacancies should be filled so that America’s elections monitor can get back to work.

Since the six-year terms of the three remaining commissioners have expired, they could all be replaced. While no more than three members can be from the same party, President Trump could use this opportunity to completely remake the FEC by appointing three Republicans and either three libertarians, or three independents. No rules require him to follow convention and ask the Senate Minority Leader to suggest a Democrat.

Public Integrity explains that many GOP senators see this as a chance for a fresh start at the FEC:

But, “there is an ongoing effort to fill all six FEC commissioner seats,” said a Republican Senate staffer familiar with the FEC nomination process, who declined to be named in order to speak candidly. “To do that though, Sen. [Chuck] Schumer and Senate Democrats must replace the two longtime Democratic holdovers. A clean slate of members will go a long way toward fixing some of the perceived dysfunction at the commission.”

Lee Goodman, another former FEC commissioner, supports this option to make lasting changes at the agency:

…Trump has a rare opportunity to shape the FEC with six new commissioners, and his sense is that the president will “insist” on doing so. Such a move would avoid the hassle of “revisiting commission nominations on a seat-by-seat basis” and avoid any one party or group of like-minded commissioners from enjoying more seats than another.

“Congress set terms at six years for a reason and the current situation affords a good inflection point to honor the wisdom in Congress’s judgment,” Goodman said.

The FEC lost a quorum before?

In January 2008, the FEC lost its quorum with only three commissioners. After a six-month stand-off during a presidential election, Senate Democrats and the Bush administration agreed to confirm five new members. Steven Walther and Cynthia Bauerly joined Ellen Weintraub, the remaining Democrat. The Senate also appointed Matthew Petersen, Don McGahn, and Caroline Hunter.